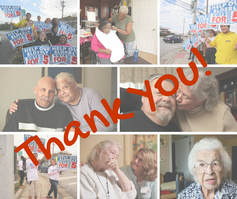 For the first time since 2008, voters in Hamilton County have approved an increase in the senior services levy. For the past 10 years, the levy which funds 92 percent of Hamilton County’s Elderly Services Program (ESP) has been losing revenue, and serving fewer seniors as a result. The increase, approved by 72 percent of voters on Nov. 7, means the county can help more vulnerable seniors remain safe and independent in their homes.

“Seniors are an overlooked, underserved population in our county. They deserve to have a choice in where they live as they age,” said Council on Aging (COA) President and CEO, Suzanne Burke. “The election results show a recommitment by voters to make Hamilton County a great place to live and grow old. I can’t think of a better way to celebrate the 25th anniversary of this levy than by voters standing up and saying ‘Our seniors deserve more.’”

COA administers the Hamilton County Elderly Services Program, which receives 92 percent of its funding from the levy. The program provides meals, medical transportation and other services that help more than 5,700 frail elderly remain independent in their homes, avoiding unnecessary and costly placement in nursing homes.

In August, Hamilton County Commissioners voted to allow an increase in the senior services levy, pending voter approval. Council on Aging requested the increase because Hamilton County’s older adult population is growing and revenue generated by the levy is on the decline. As a result, fewer seniors are being served by the Elderly Services Program. In 2005, ESP served 42 percent of older adults who might have been eligible for and needed the program. In 2016, the program served just 27 percent. By comparison, neighboring counties with similar levy-supported programs serve closer to 50 percent of eligible seniors.

The senior services levy benefits everyone and makes Hamilton County a better place to live. More than one in four Hamilton County households includes someone over the age of 65. The levy helps long-married couples care for each other in their homes. It also provides much needed respite for working caregivers who are struggling to keep their mothers and fathers at home, and it benefits local businesses whose employees are juggling work and caregiving responsibilities.

Southwestern Ohio counties have supported senior services levies for 35 years, ever since the first levy was approved in Clermont County in 1982. Ten years later, voters approved the first levy in Hamilton County, with additional levies following in Butler County (1996), Clinton County (1998) and Warren County (2002). Each levy must be approved by voters every five years in order for the Elderly Services Program to continue.
​
Council on Aging manages the levy programs via contracts with county commissioners in Butler, Clinton, Hamilton, and Warren counties.
October 6, 2017
Buddy LaRosa to serve as honorary campaign chairman for senior services levy 25 anniversary 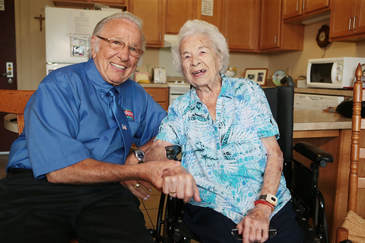 Buddy LaRosa, honorary campaign chairman for Issue 5, pictured with Hamilton County Elderly Services Program client, Feisty Flo, 104
Buddy LaRosa, venerable founder of one of Cincinnati’s most popular restaurants and philanthropist, will once again serve as the Honorary Chairman of the Senior Services Levy campaign – Issue 5.  His photo, taken with Elderly Services Program client, Florence, age 104, will appear on campaign materials. He will also record a radio ad for the levy.  Mr. LaRosa first served as the campaign’s honorary chairman in 2012.

“We are truly honored that Mr. LaRosa has put his support behind this important campaign,” said Council on Aging President and CEO Suzanne Burke. “He has been a caregiver himself and understands the deep desire of seniors to remain in their own homes, even if their health is failing.”

Council on Aging administers the Hamilton County Elderly Services Program (ESP), which receives 92 percent of its funding from the levy. The program provides meals, medical transportation and other services that help more than 5,700 frail elderly remain independent in their homes, avoiding unnecessary placement in nursing homes.

“I believe in what this levy does,” LaRosa said. “It is so important for older people to stay in their homes. I took care of my wife during her illness before she died and I had an aunt who lived to be 108. Taking care of family is what it’s all about.”

Voters have shown strong support for the levy and the Elderly Services Program for 25 years.  This year, for the first time since 2008, voters will be asked to approve a modest increase in the levy. The proposed 1.6 mil levy will cost homeowners about $40.25 per $100,000 of property value annually – an increase of less than $11 per year.

The increase is needed because Hamilton County’s older adult population is growing and revenue generated by the levy is on the decline.  The levy today earns about $2 million less than it did in 2008.  As a direct result, the Elderly Services Program is serving fewer seniors today than it was 10 years ago. In 2005, ESP was serving 42 percent of older adults who might have been eligible for and needed the program. Today, the program serves just 27 percent.  By comparison, neighboring counties with similar levy-supported programs serve closer to 50 percent of eligible seniors.

The senior services levy benefits everyone and makes Hamilton County a better place to live.  More than one in four Hamilton County households includes someone over the age of 65.  The levy provides much needed respite for working caregivers who are struggling to keep their mothers and fathers at home. It also benefits local businesses whose employees are juggling work and caregiving responsibilities.

About LaRosa’s
Using recipes from his mother and aunt, Buddy LaRosa started his pizza restaurants in 1954, beginning with one location on Boudinot Avenue. The family and franchise owners now operate more than 70 restaurants. The third generation of the LaRosa family now help run the business and continue the tradition of sponsoring local youth sports programs and other charitable activities.
Council on Aging CEO Suzanne Burke Shares Importance of Levy in Cincinnati Enquirer
​Op-Ed 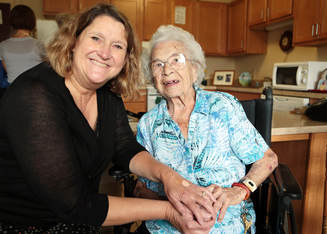 On November 7, Hamilton County voters will be asked to expand the only safety net for one of our county’s forgotten groups: vulnerable seniors. If approved by voters, the increase will amount to less than $1 more per month for the average homeowner. If the levy fails, the safety net goes away.

Since 1992, Hamilton County’s senior services tax levy has provided most of the funding needed to operate the county’s Elderly Services Program.  Without this program, thousands of seniors who need basic services such as bathing, help with meals and transportation to doctor’s appointments, would be forced into nursing homes. If the levy fails, the program will end.

As administrator of the Elderly Services Program here and in three other counties in southwestern Ohio, Council on Aging’s goal has always been to provide the highest quality service at the lowest possible cost in order to serve as many seniors as possible with the tax dollars available.

Over the last 10 years, that goal has become more difficult to achieve. Hamilton County’s senior population is on the rise. Take a look at your own neighborhood – more than one in four households includes someone over the age of 65. The county’s 60-and-older population – already accounting for one-fifth of the overall population – will grow another 30 percent by 2030. With little community funding available for older adults, this growth will put unprecedented strain on the one program meant to keep them safe and independent at home.

While the population has been expanding, the senior services levy has been shrinking – earning $2 million less today than it did in 2008.  Council on Aging has had to make changes in the program to ensure it is able to meet the need and stay within budget. We tightened eligibility criteria to serve only the frailest seniors and we found cost-savings and efficiencies within the program that brought more than $700,000 annually in savings to the county.

As a result, the Elderly Services Program is serving fewer seniors today than it was 10 years ago. In 2005, we were reaching 42 percent of older adults who might have been eligible for and needed the program. Today we are at 27 percent. By comparison, our neighboring counties are closer to 50 percent.

Many more seniors could be served by this program, but we have not asked voters for an increase since 2008. The program today provides the bare minimum for those most in need. But we have reached a tipping point. The proposed levy will help us reverse the negative trend that has occurred over the last decade. By 2020 we can serve 20 percent more seniors, and by 2022, 30 percent. The new levy will cost the owner of a $100,000 home $40.25 a year – an increase of $10.85 per year.

This is a levy that serves us all. It has kept long-married spouses together, helped working families keep mom and dad at home, and benefited local businesses whose employees struggle to balance work and caregiving responsibilities.

This levy also saves taxpayers money by keeping seniors off of Medicaid. For about $367 per month, the Elderly Services Program can help a senior stay in their home. If that same senior were in a nursing home on Medicaid, it would cost taxpayers about $4,000 a month.
The needs of seniors have been lost in recent debate over the levy. The fact is, new monies added to the levy must be spent on seniors, and any organization that has a viable plan to use the money for the benefit of our seniors must go through a rigorous competitive bidding process to get the money.

As a community, through this levy, we have made the decision to make Hamilton County a better place for people to live and grow old. Many thousands of seniors have benefited from the levy over the last 25 years and voters have been clear in their support of it – 75 percent approved the levy in 2012. We appreciate this support – as do the seniors and caregivers who benefit from the levy. We ask for your continued support to help us ensure it is available for the many thousands more who will need it in the years to come.

​Suzanne Burke is President and Chief Executive Officer of Council on Aging of Southwestern Ohio. Council on Aging administers the Hamilton County Elderly Services Program which provides basic services such as meals, personal care and transportation to frail seniors in Hamilton County. The senior services tax levy provides 92 percent of the funding for this program. The program served more than 5,700 seniors in 2016.