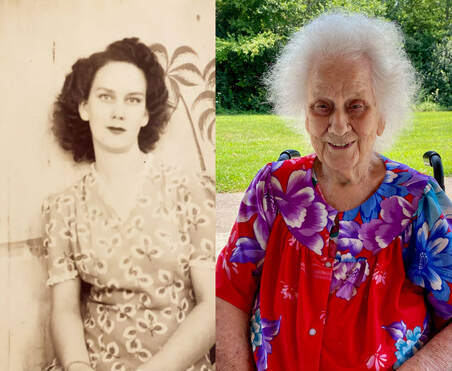 Family. That is what keeps Sylvia going. In her 97 years, she raised three children, is grandmother to five and “great grandma” to four.

In 1989, Sylvia became a widow when her husband, Alvis, died after 43 years of marriage. Sylvia has struggled with aging-related health, mobility and short-term memory issues, and the Warren County Elderly Services (ESP) is an important part of her support network.

Together, her tight-knit family and ESP have helped her to remain independent in her own home.

Not long after they married in 1946, Sylvia and Alvis built a brick ranch home in Carlisle where they raised their children, Janice, Phillip and Greg. Sylvia lives in that house today - some 70+ years later – now sharing it with her son, Phillip, who, because of his own health problems, provides much needed companionship for Sylvia, but little more. Sylvia misses his company when he travels to Tennessee to visit his daughter, Brittany, and she is grateful when her great-granddaughter stays with her while Phillip is gone.

Sylvia also misses attending her church, Baptist Tabernacle, where she was in charge of sending sympathy and get-well cards to members.

But Sylvia feels fortunate to have strong family support. All her children and extended family have a caregiving role, ranging from handling financial matters to visiting regularly. Sylvia’s daughter-in-law, Loretta, often takes her to get her haircut. And her nieces are making plans for her 100th birthday – motivating her to live to triple digits.

Even with their never-ending support, her family members can’t be with her constantly. She is grateful for ESP which fills in gaps in care the family is unable to provide.

Sylvia is quite particular about many things, especially cleaning and personal grooming. All has to be “just so.” Still, she allows her ESP aide to help her twice a week around the house, which is filled with her favorite color, red.

Even though she doesn’t cook for herself anymore, she enjoys the home-delivered meals brought to her each week. They remind her of the past, when a trip to Grandma Sylvia’s house most assuredly meant made-from-scratch biscuits and gravy, along with pinto beans and cornbread. Family members have tried, but they can’t seem to duplicate her recipes.

The most beneficial service she receives from ESP, according to her grandson, Tony, is an automated medication dispenser that alerts Sylvia when it’s time to take her medication – it even provides the correct dose. “It’s been a life-saver,” said Tony. “A few years ago, we almost lost her because she over-medicated herself.”

“I can’t imagine not having ESP services,” he added. “I don’t think she could live alone without those things. And it’s so important for us – her family – so we don’t feel guilty about not being able to be with her all the time.”