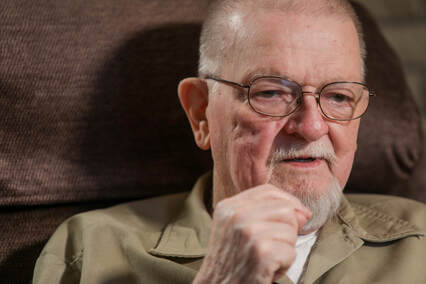 Duncan remembers the day well: January 14, 2011. He decided he could no longer ignore the strange sensations he had been having. His computer mouse felt like it weighed 10 pounds; a pen felt so floppy in his hand that he couldn’t write.

“I had tried to argue with myself,” he said. “’You’re alright. You’re fine.’ But I finally told the landlady that I thought I might be having a stroke. She called emergency and from then on, that was life-changing for me.”

At age 71, Duncan had indeed had a stroke. He was hospitalized and then in rehabilitation for three months. Returning home, he knew that without any family to help him, he would need support if he wanted to stay independent.

“That was a real education process for me,” he said. “Me and my pride decided it was time for me to admit that I needed this or that… It’s important to me – as it is for anyone – to be self-sufficient. I realize there are things I can do for myself. I don’t want to be a bother, so to speak, to someone else."

Fortunately, it wasn’t long before Duncan learned about the Hamilton County Elderly Services Program (ESP). His services include home care assistance once a week (personal care, housekeeping and respite), an emergency response device and home-delivered meals. Recently, he received a lift chair. “I didn’t think I needed it,” he said, “but I use it all the time. The caseworkers are good at trouble shooting. They seek solutions and that’s terrific.”

Born in Beckley, West Virginia, Duncan, 81, grew up in coal mining country. In 1960, he enlisted in the U.S. Air Force, serving four years of active duty and four years in the reserves. After leaving military service, he became an FCC-licensed studio technician. He started out at a small radio station in Beckley and then moved to television stations. Later, he was a service technician for fax machines until it was clear there was little future in that work. He moved on to maintenance and janitorial services for Ohio Valley Wine and Beer Distributing and worked there until the time of his stroke.

“I watch some of those exercise videos on YouTube,” he said. “But they always start out saying, ‘Get down on the floor.’ Well, that’s something you wouldn’t want to see – me looking for a way back up.”

Exercise is important though, so he has checked out an easy route from his new apartment where he can take his walker for a spin.

“The best thing about the program is when the lady comes in once a week to help with cleaning or to run an errand for me,” Duncan said.  “It’s really helpful and encouraging. It’s that extra contact with the rest of the world. It’s something I look forward to.” ​