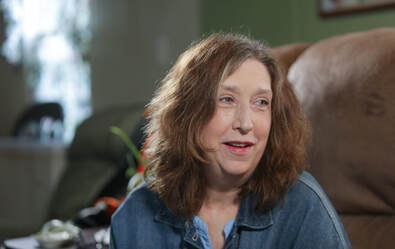 Jill’s life as a caregiver began in 2017 when her mother was in hospice care, dying from Alzheimer’s Disease. Jill and her husband had moved into her childhood home in Blue Ash to care for her mother and stepfather. At the time, Jill had a part time job that provided some flexibility in her work schedule.

When her mother died, Jill and her husband wanted to return to their own home in northern Kentucky. Hospice of Cincinnati referred Jill to the Hamilton County Elderly Services Program (ESP) to help her 84-year-old stepfather, Sam, continue to live independently. According to Jill, “Dad didn’t even know how to boil water.”

Sam holds a special place in Jill’s heart. She considers him a father, not a stepfather. When Sam married Jill’s mother, he became a father to six. That’s a special man. A former science professor, Jill describes Sam fondly as a learned (he has five degrees), grumpy former golfer and sales rep. Jill loves him very much and she was determined to care for him after her mother’s death.

One of the things Jill quickly came to appreciate about ESP is its flexibility. When Sam first enrolled, he needed only home delivered meals and home care assistance once per week. Over time, however, Sam’s needs increased, and ESP was there to adapt along with him. What was most remarkable was when Jill called her dad’s ESP care manager to ask if she could recommend a plumber to fix a running toilet. Amy, Sam’s care manager, arranged not only to fix the toilet, but also had grab bars installed in the bathroom, along with an outside ramp so her dad could come home from a hospitalization to a more accessible house. Jill said, “Amy was always there when I needed her.”

For Sam, Jill believed the help from ESP gave him a renewed sense of independence. He was happy to be around things that were familiar to him – in his own home. The help was especially important during the pandemic, when Jill is certain her dad would have been at risk of losing his independence. “His will to live was a lot stronger when he got help,” she said.

With Angela, her dad’s home care assistant, coming three times a week, Jill had some peace of mind and was able to accept a full time position with a local school. Jill visits her dad on days when Angela isn’t there, walking into a clean house with laundry done and meals prepared.
​
“The days Angela comes, I can sleep at night,” Jill said. Perhaps the biggest benefit of all, however, is that Jill is able to spend quality time with her dad during her visits, instead of focusing on all the chores that need to be done.

Caregiving for an older adult has a ripple effect, especially when you’re a working caregiver, and Jill appreciates the benefits and value of the Elderly Services Program and the tax levy that supports it. She said getting help for her dad not only benefitted him, herself and her husband, but also those around them, including their family, friends and co-workers.

​“Council on Aging benefits all those in my life, not just me and my dad,” she said, adding, “We are all getting older, we are not immune [to aging], why vote no?”